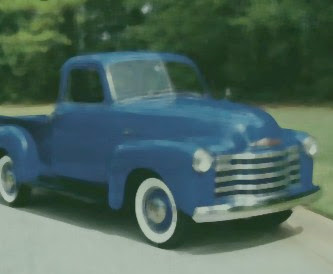 They weren't simpletons. They knew deep down he wasn't really their son. They had to know. But their misery and their loss had afforded him a place with them, and for all intents and purposes he was Jacob McVeigh. It simply didn't matter to them. For him, for this Jacob impostor, despite having entered this situation with less than stellar motives, it somehow worked out--it changed him, it made him better. Somehow. He acclimated. He settled; something he'd never done before in all his days. He actually liked being Jacob. Liked it enough to let it become him.

He'd learned about them through Brian Walsh; the man who killed Jacob--the creature that had made him disappear. Brian was huge man. Elephantine in a compact way, broad, thick shoulders book-ending a wide, dense chest. He had a round head with shifty green eyes, with tiny ears; his blonde hair was chopped into the standard buzz-cut all the inmates got. He had surprisingly small feet for a giant frame like his. He stood at 6'10"; he had to duck through the metal grate of the cell door to get in and out. ‘Jacob' had made him take the lower bunk.

Jacob making any man that size do what he wanted was part of what made him different. He wasn't a small man; but one of decent height. In a fight, he would have been snapped like a twig by the likes of Brian, but Jacob's special ability for manipulation made the monster his pet. Brian, the heartless murderer, the simpleton, the ham-handed buffoon, was Jacob's personal bulldog. He had to only gaze into the beady, vacant eyes with his own piercing laser-blue gaze, and the tiny mind within would roll over and bare its belly to him. Brian saw a mightier beast in that gaze, a deeper, darker, angrier creature than he could ever hope to be. And far, far smarter.

"It's gotta be the weirdest thing..." the giant would mumble in his oddly high-pitched voice, "...you look just like him, I tell ya. Jus' exactly like him. It's either that or I'm just seeing you this way ‘cuz I did what I did to him." Brian had starting listing his victims to Jacob the moment he was shoved into the cell with the huge man. Brian was in prison for killing a young man he'd picked up on the streets. Jacob... the real Jacob was a similar victim. He arrived in the city, a young and confused runaway-and immediately his innocence was dashed so terribly, he never recovered; never found normalcy, or goodness. Just a life of drugs and prostitution. He just ended up one of many unknown victims of the darkness. Dead in some ditch, not even given the dignity of being recovered. The buffoon could do one thing right; and that was hide a body.

At first, the fake Jacob didn't really care. He counted Jacob among the other victims the beast boasted about killing... the ones he'd "gotten away with"; the ones that were never proven or never found. He confided in him all of his conquests. And Jacob-the-false sometimes listened sometimes didn't. He stared patiently at the ceiling. Time was of no concern to him. He wasn't in for so long. As his sentence began to wind down, he knew it was time to find that persona, to discover his identity. And then the assertions of his similarity to this Jacob came back to him. He used his library time to find information on the victim doppelganger, Jacob McVeigh. And he found a plethora of information; and a sad little website made by friends and family with pictures of him just before he ran away and disappeared... and yes, the ox was right. The kid looked like a seventeen year-old version of the man Brian shared his cell with. Jacob-the-false had more angles on his face, a gruffness to him... but the same piercing blue eyes, the same crooked smile, the same swarthy tones. He realized he could easily pass as the boy... all grown up--weathered a bit, maybe by life, but nonetheless, he could do it. And so he decided he would become Jacob McVeigh. He would become him and live the life the boy might have had if he hadn't left, if he hadn't been destroyed by his own desperation and murdered by a massive lumbering pile of very stupid flesh.

He set up an email address through a free service, and clicked on the contact link on Jacob's website.

~~
Jacob the new, Jacob the imposter... With a quiet, whimsical smirk, he gave the beast one last cutting gaze, and then followed the swaggering corrections officer down the corridor, ignoring the comments and the glares of the inmates he'd virtually ignored for eight years. They all sensed his power, and they feared him. As they walked away, one guard called out a request to the plexiglass window where more guards watched, and the cell door jerked into motion. Just before the aperture became too restricted; Brian stepped out of the cell, and with a besotted grin, climbed up onto the railing of the mezzanine, and with an crazed laugh, he threw himself down the forty feet to the common, where his round head cracked open on the hard, scuffed concrete floor.

The commotion didn't slow Jacob's release; which he expected it would. He was given his old clothes in a black garbage bag, and a Ziploc bag of his meager possessions. The smell of cigarette smoke wafted up at him from the clothes as he pulled them out. He was slightly amazed by the longevity of the aroma. Eight years, and it was like he'd just stepped out of the bar where he'd been arrested. He put the clothes back on, not liking that it felt like his old persona was wrapping itself around him again; he was not liking it at all.

His ID card was there. Richard Mosely gazed back at him, his face a mirror to the blank mask that was in front of it. Richard Mosely wasn't there anymore, wasn't needed. With a flick of the wrist the card sailed into the garbage bin, along with along stale pack of cigarettes and a lighter. He put his fairly empty wallet into his back pocket; donned a slate-gray jacket, and strode out of the room, where he was accompanied through the series of gates that led to the unknown. It took him a moment to realize he was out. One minute it was gate after gate, buzzing him through, turning keys, latching bolts, and then suddenly, he was standing facing the a row of boarded up houses. The slam of the gate behind him reminded him of what he was doing and where he was. He straightened. He needed new clothes. A new persona. He was Jacob now.
~~
The loss was so evident in her eyes, he could have probably looked like Brian the beast, and she probably would have believed him. She clutched herself to him, and her embrace was hard and desperate, the sobs, the snot, the excitement loud in his ear. For a moment he might have even felt it, the warmth, the acceptance, the love, but only for that moment. In the beginning his hardness had persisted; they decided it was a side-effect of the trauma of his prior life. He would soften eventually, smile again, drink beer with pop and work on the truck together. But now, when it was all new, he was stiff. It was okay. He had reason. They didn't ask him questions. They didn't want to; they didn't want to trip up the imposter. They just wanted their son back, and he would do well enough.

Helen and Stan. Stan and Helen. She was a tiny thing, 5'2 at most, her steel grey hair was straight and heavy, once a glossy black like Jacob's. She kept it to just below the shoulders in length, a hard straight line of hair, and bangs also in a neat line that still somehow softened her face. She was pear-shaped, with a pretty face and glisteny blue eyes. She wore black slacks with modest flats and a little top of magenta. She'd gotten all dressed up to fetch him at the station. There was no need for manipulation on Jacob's part; they were willing victims of his scam; they were eager and loving. Stan was a taller man, slender and grey. He had a face that showed many years of kindness, and eyes of dark blue nested in the heavy folds of his lids. His jeans looked like they would slide off him at any given moment, they were the dark blue variety, which had a crisp seam down the front of the legs ironed right into them. With that, he had a perfectly pressed pale yellow button-down shirt on, tucked into his belt, which was pulled up almost to his chest. The clothes were stiff on his lanky, bony frame.

"Jay-jay..." he kept saying, tears filling his reddened eyes, "...my boy, it sure is good to see you. You sure have lost some weight, you're a skinny one; that's sure about to change, mom'll put some meat on your bones; she remembered you know; she remembered your favorite and cooked up a whole batch of shepherd's pie for you, it's all waiting for you, do you have bags? Let's get them in the car..." he rambled. Helen clung to his arm, gazing up at his face simply beaming with love and happiness. He knew it, though, he felt it; that they knew. But he also felt that they didn't want to believe it, or that they didn't care. Now they had someone to fuss over, someone who wanted to be with them, someone who wouldn't break their hearts and run away and desert them. No, this Jacob came to them, and they wanted him back. They wanted him.

He folded his frame into the rickety 1950 chevy truck, squeezing in next to mom while dad turned the ignition. He'd kept the thing pristine; a shining blue, the chrome almost undamaged. It roared to life, and he looked at Jacob expectantly; waiting for him to comment on the truck, waiting for him to recognize it, to acknowledge the familiarity of it. Instead Jacob just smiled blankly at the old man. Stan simply put it in gear and drove, turning his gaze back to the road, too happy for it to matter. They had their Jacob back, nothing else mattered. Nothing else mattered at all.
Posted by Miranda Mayer at 7:00 AM