A NookBook at last. 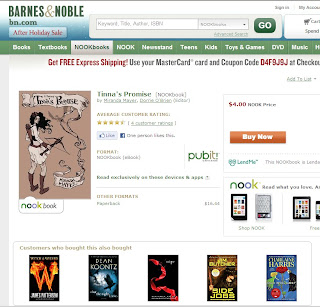 It took me a while to figure out that Tinna's Promise was not available in any e-book format on Barnes & Noble. Then it took me another eon to figure out how to go about having it put on the NookBook list. I had to go through their PubIt! program... which took three long days for it to appear (not to mention a LOT of formatting I had to perform beforehand). I forgot where I put the final version of the manuscript after I sent it to the publisher... so I had to buy the publisher's ebook version, cut and paste it into an .rtf file, and start cleaning it up and reformatting it. I did the best I could considering how tedious it was re-constituting lines where there were breaks inserted, re-spacing chapters, etc, on to mention deleting page numbers and crap like that. There are still some annoying issues here and there that need fixing.

But it's there! Finally; and like the Kindle version, I've offered it up for a mere $4.00 (which isn't a lot). It's still $6.00 on the publisher's page... so it's a deal. There might be a formatting muss-up here and there, but please have patience... I've been refining it as I go along, and I will be adding in the first chapter of Tinna's Might on the end of it this weekend. Please help my book climb the ranks at the NookBook site (if you're nook owners). It's in ePub format... I think a few readers can open those.

Editing on Tinna's Might continues on through the arduous process... I'll keep everyone apprised. Editors are busy people.
Posted by Miranda Mayer at 3:34 PM No comments: 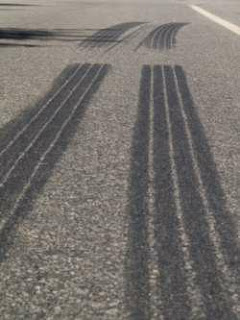 :::facepalm:: Curse you job! It's like it is a black hole... sucking away my creativity, my enthusiasm, my motivation. It's so frustrating. Book three has come to an impromptu halt. Of course, waiting on the editing work for book 2 is also taking its toll.. it's like I need to get my second kid out of the house before I'm ready to continue working on the next one. I've been reading a lot lately... Trying to just give my brain a break.... Witing is hawd. Bwaaah. /whinefest. :^D
Posted by Miranda Mayer at 5:17 PM No comments: