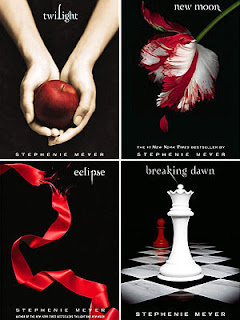 I pick on Stephenie Meyer a lot in my private life. It's mostly just jealousy because she has had such huge success selling such blatant mediocrity. Most writers who bitch and moan about her books are probably feeling the same way. They're pissed. I've been reading her books this holiday season as a sort of 'research' project, and I am annoyed at how I am compelled forward to read what is inherently predictable and utterly absurd.

I have to face it... for a pre-teen, these books are f**king brilliant. I had to suck it up and admit that yesterday, when I bought yet the next installment to read. Like most romance novels, the premise is simple... but girl A with boy B, give them lots of passionate feelings and then drag out the 'union' for as long as possible, and present it with as many challenges (contrived or not) that you can throw in to make it interesting.

He's a vamp. 'I'm too dangerous for you, young lady yet I cannot stay away' boy. She's 'special'... ordinary but not... something the simpering teenaged girl readers can relate to but with something exceptional that makes her attractive to this extraordinary piece of moody, broody, angsty and sparkling perfection that is the boy. It is excruciatingly trite, the whole thing... the vampire family, the teen-yearning, the angst, the never-ending and very contrived discussions about why this could or could not work... the hapless and clueless and wolfy second-runner-up... a few random crises to give the book some measure of momentum, and the heroine needing constant rescue. It's barfworthy. It's perfection.

Stephenie's writing style is simplistic but with just the right amount of sophistication (she must have a fabulous editor) that it draws the reader in; even cantankerous, jealous indie authors like me, who can only dream of that kind of readership for their work. Add in the enigmatic titles, the pretty covers... you've got a decent product... I cannot deny that this is really a brilliant scheme.

I have to say though, I watched the twilight movie the other day in 12 parts on youtube, and I found the movie to be a bit better put together than the book. Namely because the book concentrates mostly on Bella and Edward's angsty and passionate interchanges for the duration, and the murderous vamps just sort of randomly appear as if action is an afterthought... but in the movie, they are hinted at from the beginning, and made to let you believe that the murdering vamps could possibly be Edward or his family. Despite the movie sucking pretty badly, it at least got that right.

Their faces are crowding,
They’re all talking loudly,
They see her but she isn’t there.

They claim that they care
While they all strip her bare
And they greedily take in the show.

He watches this madness
He can see all her sadness
Underneath her gaze, he knows.

They decided and chided
And sometimes they guided
Because they all thought that they knew best.

He watched and he frowned
They turned her life upside-down.
But he wasn’t at all like the rest.

She’s exposed and she’s naked
While the rest of them take it,
He can just avert his eyes.

Her unseeing gaze
Caught the turn of his face
And she thought she was going to die. 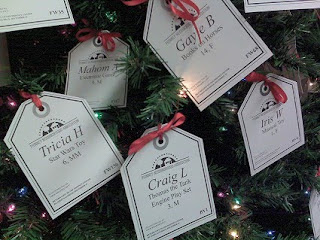 It always seems almost trite to hear people discussing the meaning of Christmas. This year, however, is a difficult year. For myself, my husband and my family. Layoffs, elevating prices... we decided we were not going to ‘do’ Christmas this year. We were going to buy 1 present for the 1 nephew, and the adults can survive fine without tchotchkes that mean little at all. We would try to adhere to the ‘meaning’ of Christmas and not to the commercial aspect of it. I am comfortable with this decision, we will gather for the holiday, and share the love, but save a buck or two.

Anyway, each year, I try to participate in a ‘giving tree’. I love the idea. Last year, I got a nine-year-old boy who asked for clothes. I went to Old Navy and went wild. I bought something like $80 worth of hoodies, jeans, shirts and so on. I hope they fit him, and I hope he liked them.

This year, I went with a local giving tree for kids in my neighbourhood up here near Mount Hood. Talking to the woman who was hanging the cards on the tree, I was appalled to hear that there were so many kids around us who lived in abject poverty, and who had absolutely nothing. Of course, to me it’s not about the ‘having’... but for a kid who probably won’t even get the basics ... I felt it was important for the child to have the experience of surprise and of getting something simple and something you want.

I usually pick kids who ask for practical things, because I have this old-fashioned notion that it’s better to buy them practical things. But this year, I saw a tag that said: 8-year-old girl. Wants: makeup and small toy horses. My brain said: “Aw”. And then it melted and I was thrown back a few decades into my memory.

I wasn’t a girly kid. I still don’t wear makeup or froo-froo pink things. I wear sensible shoes and jeans and sweaters, and I keep my lion’s mane of curls long and crazy. I hate dolls); they creep me out and always have. I did have barbies when I was little, but they were not the little fashion models and hair-do dolls that they were for other girls. For me, my barbies were characters in an epic fantasy story that spanned years of my life; like a soap opera. Ken was the guy who was either evil or was the fall-guy for the story, and the far manlier 12” GI Joes were the main squeezes. I had Sindy, a European version of Barbie, and since she was way better jointed and way prettier by my standards, she was usually the heroine, and the other Barbies and non-barbie fashion dolls held court. I made them costumes, and they had horses and I would spend hours upon hours acting out the epic. I took this very seriously. I was a weird kid, but I find that most fantasy writers I’ve met were weird kids. We always exist both inside our imagination and in the ‘real world’; no matter how old we get, we do it. But ultimately, I was still a kid, and if I think about what it felt like then to get something that you *really* wanted, to open up that Christmas paper and to have your expectations met, or even better; exceeded, it’s an amazing thing.

When I was about seven or eight, we lived in a duplex shared with an older couple whose daughter had already moved away. The husband was a curmudgeony old dude who spoke rarely, and the wife was a wonderful homemaker who obviously missed having her daughter about. They heard the craziness of my family through the shared wall of the house, I suppose... the screaming arguments, the slamming doors, and they saw what a weird, despondent little soul I was and took pity on me. I wish I could remember their names. Anyway, I spent inordinate amounts of time next door, eating delicious Belgian leek soup, and holding boards straight for the old man while he sawed them. They both doted on me in their own way. One year, I was over there hanging out in their dark, cozy sitting room, eating some cookies, listening to the grandfather clock tick its heart out, and wishing I belonged to them. The lady of the house appeared in her flowery apron carrying a toy catalog.

“Show me what you want St. Nicholas to bring you this year,” she told me, handing me the catalog. Guileless and clueless as a child can be, I opened up the glossy pages, and filled my eyes with all the wonderful things. It never occurred to me that she planned on getting me anything; I thought it was a sort of game of fantasy, perhaps. My family never asked the question what we wanted... never took the time to figure it out; so a lot of times, I got things that were hit or miss. Baby dolls and clowns that freaked me out and I didn’t touch. So, seeing a catalog full of everything a kid could want, I pointed out a huge array of stuff and told her why I liked each thing and how they would fit into the story I was playing out, sometimes even on their sitting room floor (I would carry the stuff over a lot). She listened and took mental note. When I was done pointing out Sindy’s horses, her riding attire, furniture pieces, and all other things... I promptly forgot about the exercise and went to enjoy a Tartine made with paté. A few days before Christmas, a huge suitcase appeared on the cement railing between our duplexes, and it had my name on it. Inside, was every last thing I pointed out in the catalog. Imagine my surprise; one, to get such special attention, and such a smorgasbord, but two, to see that the neighbour had been so thoughtful as to remember each and every thing. It was astonishing and wonderful and it made me feel really special.

I am really think that the kids who ask for practical things are either passively or overtly being pressured to by adults to do so—and that deep down, they want toy horses and cars and games more than they want Old Navy jeans. But when you’re not in a position to be demanding, when you are asking for charity, you are going to do what’s sensible to insure nobody judges you ill for it. So I was pretty struck by the little card with the honest response on it in her shaky handwriting. She wanted makeup and she wanted toy horses. I saw it and I immediately wanted that girl to feel what I felt that Christmas long ago, and so I snatched up her tag, and went shopping today. My work gave us $50 gift cards to a local store called Fred Meyer last week. I took that card, went to Freddies, and blew most of it on her.

I got this huge makeup kit with all sorts of eye-shadows, blushes, lipsticks, nail polishes and liners and in sparkly colours. It’s awesome. To pair with the kit, I got this adorable makeup box for her to keep her things in, with pink ‘kisses’ all over it. I also bought her a really cute little set of Breyer-brand horses that I know she’ll love. I got a huge Christmassy bag to put it all in, and some curly-q bows, and made sure she’d have something to open up and delight in. I normally HATE shopping. I hate stores. But I confess, I had more fun shopping for those silly things than I ever had shopping for members of my family, and the ungrateful, quite entitled kids in it. I enjoyed it because I knew she’d love it. It wouldn’t be the forced smile and the ‘oh, one of these things...” looks when she opens the bag. For that I’m sure.

So no, we are not doing Christmas this year except for two kids; one who expects it and takes it for granted and the other who will surely be delighted in a simple gesture. Merry Christmas kid, whoever you are. You made my Christmas. :^) It’s selfish, I know... but it was such fun.
Posted by Miranda Mayer at 2:04 PM 2 comments: