When editing reared its ugly head... Miranda turned her tail and fled 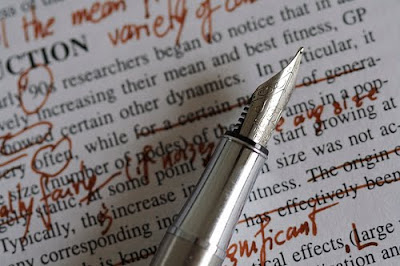 Tinna’s Might is turning out to be more of a bear to edit than I had arrogantly assumed. I thought the edit would fly by, but I am fortunate to have someone (Ien Nivens) editing the book who has invested himself in it as well and feels strongly about making bold suggestions for the work. The editor also happens to be a writer which adds an interesting element to the process. Recently, there had been a longer-than-usual gap of time between edited chapters. I dropped him a note asking him if everything was okay. He wrote back that he had the chapter finished and sent along a note asking me how open I was to suggestions of ‘significant change’. At first I was like... Uuuuuughhhhh... Seriously?

But then I read his explanation and could not deny that he was totally right. He was concerned about the timing of a significant turn in the plot, the build-up (or lack thereof on my part), and the way the story is divided up (chapter and break-wise) to maximize the impact of this plot-turn. Ien was completely 100% correct in this determination. It’s funny how when you’re writing and proofreading as you go along, in your head you think that something is impactful enough—that it makes a statement—when in truth, you haven’t featured it enough so that the reader will recognize it as a significant moment in the story. I simply didn’t see it. But Ien did. He was a bit reluctant to ask me to make this huge change, and sent me a note that was almost apologetic about it.

I promptly responded with a: “No, no, no! You are totally right. This is exactly the sort feedback I need!” note. His suggestion really proved to me that I picked the right person to edit this book. He was vastly relieved by my non-defensive response--and probably a bit surprised because we writers can be whiny sometimes. What Ien disclosed to me after was that he too is in the middle of his writing project and he realized he was asking me to do something he needed to do as well. So he took the extra time do it with his own work so he could feel okay about asking me to make a large change.

So to work I must go. His edits are wonderful and he’s doing a great job. But what I appreciate most is that he believes in what I’m writing enough to be honest with what he thinks needs to be changed. He’s cautious about it, probably worried he’s going to hurt my ego or something. But luckily, I’m okay with criticism. I even value it. A friend of mine calls criticism a form of ‘excellent failure’. She says it’s something to learn from, not something to hide from. She’s not wrong. Yeah, it hurts when someone picks apart what you’ve painstakingly written—but ultimately, these editors are looking at our work from the perspective as a reader—and helping us to make sure our story is told in the best fashion possible.

Ien is extremely respectful of my style, and so was my first editor, Dorrie O’Brien; although I have to say that I sort of wish Dorrie had been a bit harder on me—and suggested some big changes along the way. Someday, I might re-edit Tinna’s Promise. What I would change first off, would be the first chapter. I don’t think it was a great idea to start a book off with someone you didn’t really like very much (although given a chance, Taneth grows on you)—but your opening pages are crucial to draw the reader in, and an arrogant rant just isn’t attractive. You live, you learn. Tinna’s Promise remains something I’m very proud of and I stand by it, even with the questionable choice for a first chapter. But I do hope to fix it some day.

The moral of my story is... editing is a crucial process a book must go through. And honestly, it makes a better writer of you. Challenges and huge changes may arise, and it might make you want to cry into your soup, but in the end, you’ll have a better product for it and you’ll be thinking about that on your next project.

I cannot tout editing enough. I confess with Blackroot, I didn’t bother, but Blackroot is a source-story, not a full novel; I took elements of Blackroot and spread them out in the Tinna Trilogy, so I look at Blackroot like practice rather than the real thing, so I won’t invest on editing for it. It’s just a lark. The Tinna Trilogy is not. I take these three books very seriously. I realize how important it is to make sure that there is as much effort invested in lending them quality and worth as possible; not just for the readers, but for my own integrity as a writer.

So find yourself a good editor—and listen to them—even if the things they ask of you aren’t always what you want to hear.
Posted by Miranda Mayer at 2:35 PM